With the NHL trade deadline set to hit on March 1st, NHL GM’s are trying to figure out if their team is a buyer or seller. For the first time in a long time, we could classify every Canadian team as a buyer. Every Canadian team is either in a playoff spot or no more than 4 points out of one. With that being said, every team has holes to fill if they’re serious about making a run this spring. Here is one trade every Canadian team should execute if they want to make a playoff run.

Why this works for Ottawa: They get some veteran scoring depth to add to their top 6 forwards. He current has 14 goals and 36 points with Detroit, which isn’t extraordinary but definitely helps the Sens who are ranked 20th in Goals For. Vanek comes with a low cost, expiring contract that can return a high reward should he provide consistent scoring in the playoffs like we have seen in the past.

Why this works for Detroit: With Detroit way out of a playoff spot, and Vanek being a rental, they don’t have much bargaining power. Lazar is coming off his entry level deal and hasn’t lived up to the hype in Ottawa. The former 1st round pick in 2013 has only 12 goals and 36 points in 173 games over the 3 years of his entry level deal. Given the young nature of the current Red Wings and the upside of Lazar, it might be worth it for Detroit to resign Lazar for a 2 year deal averaging under a million per. Who knows, the kid might pan out for them. The conditional pick should be based on either if Lazar resigns or Vanek scores x-amount of points in the playoffs. 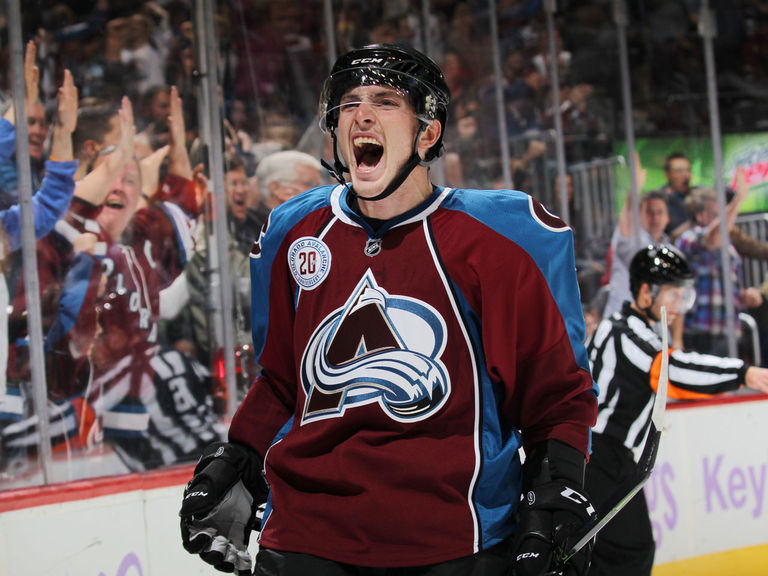 Why this works for Montreal: MTL has been at the top of the East for the last few years simply because Carey Price is the best goalie in the NHL. They has depth on D but lack top line forwards to really carry this team through a playoff run. Duchene is that guy. He becomes their top line centre, creates depth at that position and brings a new dynamic to the team which really doesn’t have a leading star amongst the forward group. This move makes them serious cup contenders.

Why this works for Colorado: The Avs seem to be tanking…for who? I’m not sure. There doesn’t seem to be a generational talent in this draft, but who knows. They seem content on rebuilding and they have MacKinnon who is a pretty good building block. They’ve been asking for a lot for Duchene, and rightfully so, but if MTL is serious about a cup you have to sacrifice a bit. COL getting Sergachev gives them a potential top 2 defenceman that is a nice piece when rebuilding a team along with MacKinnon. The picks are pretty much a necessity for any Duchene deal and MTL can live without them. Desharnais has an expiring deal and would need to be thrown-in to help with cap relief for Montreal, no biggie for Colorado. The picks and a young promising defenceman are the prize here.

Why this works for Toronto: The upstart Leafs surprisingly find themselves in a playoff spot. Their young core of forwards and solid goaltending has carried them to this point….yet their defensive core is not one that is desired by many. After Reilly and Gardner, the quality of players severely drops off after that. Despite Gudbranson currently being injured, he could be some solid help on the back end for the Leafs if they are serious about making a run. Gudbranson is set to return by the deadline and is on an expiring deal. Giving up a guy like Seth Girffith and a potential pick (which Toronto has plenty of) is something that would not derail the Toronto rebuild. If Gudbranson has a good showing, then they can re-sign him before his contract expires at the end of the season and make him a serious piece of their defensive core moving forward. The 25 year old,  6’6 Gudbranson would automatically be considering one of the Leafs top 3 defencemen, which is something you need in the playoffs and in a rebuild.

Why this works for Vancouver: The Canucks have done a pretty solid job without Gudbranson since December, so they may as well try and get something for him before he bolts this summer. Getting a guy like Seth Girffith adds some depth to their top 9 forwards. Griffith has had a merry-go-round kind of year; starting with the Leafs, being claimed by the Panthers, doing poorly with the Panthers, then getting claimed again by the Leafs and finally tearing it up with the Marlies (18 points in 14 games). With his contract set to expire, the Canucks get a low risk forward they could possibly re-sign for cheap to add depth for the years to come. I personally think Griffith could be a solid 3rd line scorer in the NHL. The conditional pick from the Leafs would be based on how many games Gudbranson plays/if the Leafs make it past the 1st round. 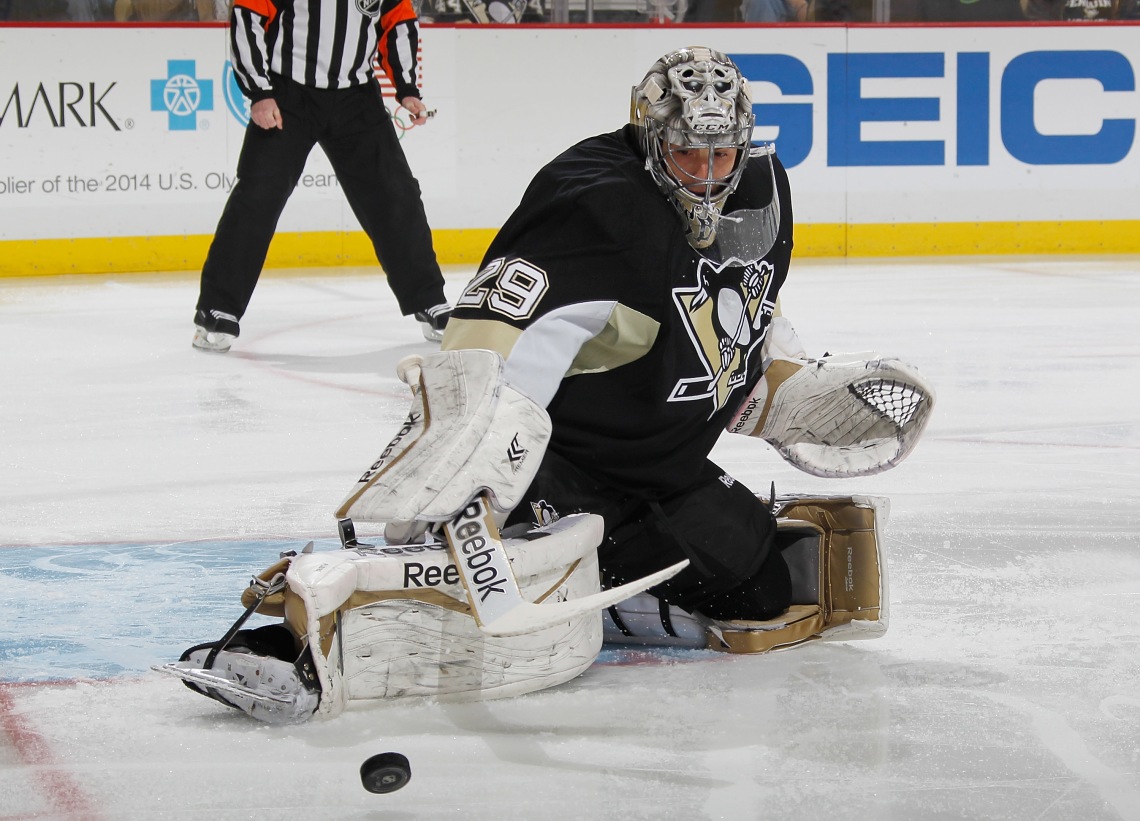 Why this works for Calgary: The Flames goalie situation has been pathetic since Kipprusoff decided to retire in 2013. Adding Fleury would finally (hopefully) give the Flames the stability they need in net to support their young team. It is no secret that a solid goalie is needed to make a deep playoff run and Fleury has been the best example of that over the last decade. Fleury still has 2 more years on his contract after this season, which gives the Flames ample time to build up their next generation of goalies in Jon Gillies and American World Jrs stud, Tyler Parsons. Taking back Trevor Daly on an expiring deal helps make this move cap compliant.

Why this works for Pittsburgh: The time is now or never for PITT to get something for Fleury. If they don’t trade him by March 1st, then he might as well pack his bags for Vegas because he will surely be claimed in the expansion draft. You are only allowed to protect 1 goalie per team and it seems that the Penguins have decided to go with Matt Murray. Since both teams are right up against the cap, trading Fleury to Calgary would automatically require Pittsburgh to take back Wideman. They have similar cap hits and it’s the only way to make it work. Adding Elliot maintains a veteran back-up with playoff experience behind Murray. Both of these guys are on expiring deals, so they essentially keep the talent level the same for a playoff run but the pens don’t have to worry about these players after June. Poirier and Wotherspoon are talented prospects but have slipped down the depth charts in Calgary. I believe both would benefit from a change of scenery and PITT would benefit from added talent to their depleted prospect pool. After this season, the trade works out to be Fleury for 2 prospects, which at this point may be the best Pittsburgh can get for him.

Why this works for Edmonton: The Oilers have finally put together a solid year and seem to be a lock to make the playoffs. Their defensive core and goaltending duo seems to be doing the job, though every team looks for scoring depth and grit heading into the spring tournament. Thats where Boyle fits. The 6’6 veteran rental would bring some playoff experience and size to a team with high flying young scorers. This is a depth move for Edmonton and signifies that they are transitioning from a rebuild to win now mode.

Why this works for Tampa Bay: The Bolts had an uncharacteristically bad year. With that being said, they may as well try and get something for their expiring assets. Getting a young defenceman like Jones may pay nice dividends down the line. The 2015 4th round pick is having a superb year in the WHL with the Portland Winterhawks, putting up 46 points in 51 games. He is a young offensive defenceman which the Oilers can afford to part ways with. 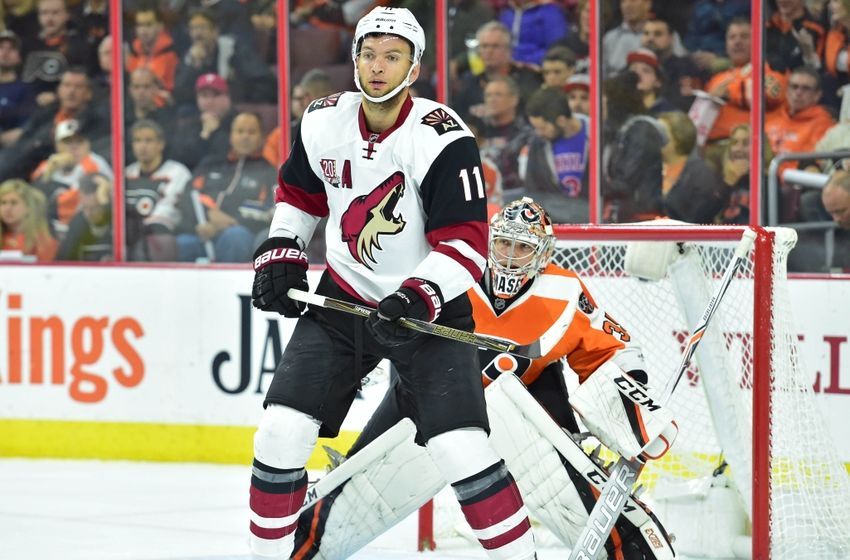 Why this works for Vancouver: The Canucks are currently the furthest Canadian team from a playoff spot, yet they are only 4 points out. By the time the 1st comes, they may be sellers or they may be buyers. Assuming they are buyers, adding a tree to their top 6 like Hanzal really gives them some added size and scoring that they lack. Hanzal has potted 15 goals on a brutal Arizona team, now just imagine him playing with the Sedins. He has an expiring contract, so there is no cap commitment after this season, just added scoring for a playoff run.

Why this works for Arizona: The Yotes are bad once again and they’re young GM will be looking to get rid of his assets for anything that floats his boat analytically. Looking at past rental deals for 2nd/3rd line players has seen a couple picks being exchanged, so it’s not an unreasonable ask by Arizona. Adding these picks will add to Arizona’s pool of prospects, which will likely head into a full rebuild this summer given all their expriing deals. Should Vancouver go into seller mode, then this trade doesn’t happen as they would likely value the picks over a rental…but you never know with Jim Benning.

Why this works for Winnipeg: The Jets need a goalie. Much like the Flames, their experiments in net have largely resulted in sub-par returns for the team. They are currently 1 point out of the wildcard, but have 3 more games played. They’ll need their goalies to steal some games down the stretch and that won’t happen with what the have. Adding Bishop gives them a solid number 1 to go along with Hutchison heading into a playoff drive. If they are serious about playoffs, which they should be, they need a goalie that can get the job done.

Why this works for Tampa Bay: The key in the deal here for Tampa is Morrisey. He’s a young defenceman who’s had a solid season for the Jets. He’s still on an entry level deal, which gives him cap value and brings versatility to their meddling defensive core. TB is in the same situation as PITT in regards to losing a goalie for nothing, but may be able to pressure Winnipeg into giving them a coveted player like Morrisey as pressure mounts from their fanbase to make the playoffs. Adding Hellebuyck would just be a throw-in to help Tampa get through the season with 2 goalies. It doesn’t seem that Winnipeg is interested in re-signing him when his entry level deal is set to expire this June.