I have been saying this since the Raps signed him to thag horrible deal. Why? If you watched one Raptors playoffs series over the last 4 years, you know exactly why.

In sports there are practice players, regular season players and playoff players. Your Max Contract guy should be all three, DeMar maxes out as a regular season player. This is why I say he isn’t THE guy, because THE guy carries your team in the playoffs and doesn’t need to be carried through the playoffs. It is incredible how at times he can be so good and so terrible, it’s pathetic.

Last night was as pathetic as it got as DeRozan was held to 1 POINT (from a Technical Foul Free Throw) through 3 quarters. That’s a fucking joke. As soon as Demar was double teamed he looked like he never held a basketball before. It’s sad to realize that this series against Cleveland hinges on his performance. Imagine if DeRozan put up his season avg of 27.3 ppg in this series? It could be a completely different series here!

DeRozan is historically bad in playoffs, like one of the worst ever when it comes to shooting. And despite Lowry being higher on this list below, he gets a pass because he isn’t manking max money (yet) and even when he’s shooting like shit, Lowry always seems to be involved defensivley. 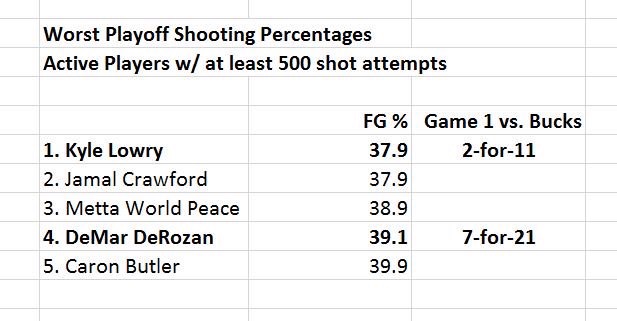 (Excuse any typos, I wrote this on my phone)