With Jays Spring Training set to get underway with their first full team workout this week, I outlined the top 5 prospects who I’ll have my eye on this Spring. Whether they’re future franchise cornerstones, contenders to be early call-ups or guys with their last kick at the can to make an impression with the team, these are the top 5 you should be eyeing:

Rowdy (great fucking name), spent all of last season in AA New Hampshire. He raked in 24 HR, 81 RBI while slashing .297/.387/.530 in 124 games. Not Bad. He does have high strike out numbers (92), and I’m sure his main goal this spring will be to show he can put together quality at-bats. His defence is respectable only committing 7 errors all year.

Where he starts the season: AAA  Buffalo – I’d prefer him to start the year on the Major League roster over Smoak, but he’ll be in the minors until he can correct his strikeout trend and prove he can compete against better competition in the higher ranks.

Where he’ll end the season: Majors – The Jays major league roster sucks ass when it comes to first base depth. Smoak and Pearce are set to be the most pathetic infield platoon of any contending team. If they shit the bed (which I anticipate they will) and Bautista stays in RF this season (which isn’t guaranteed) I think we could see Tellez called up before the all star break as an injury replacement (Pearce is fragile) or to give the offence a boost should they need it. This all hinges on the notion that he will continue to hit like last season and reduce his strikeouts. At the very least, he’s a September call-up.

Many teams have tried to pry this kid from the Jays farm system in trades, particularly in the Price & Tulo trades, because of the tools he possesses. Jays have kept him, although this year he has to make some serious progress. He spent the last season and a half in Single A Dunedin, although last year was a forgettable one filled with injuries. He’s not your typical power hitting CF, he’s a poor mans Dexter Fowler. He did improve his base stealing, swiping 18 in 24 attempts although a guy with his speed needs to put up more than 2 triples and 17 doubles. His speed is his strength….and his bat was his weakness last year. After hitting an impressive .298/.398/.421 two years ago, last season he hit just .236/.344/.378 while striking out 117 times (yikes). A guy with his kind of speed, needs to get more aggressive on the base paths and actually get on base if he wants to be that desired leadoff man he’s projected to be.

Where he starts the season: Single A Dunedin – Unless he hits .400 this spring and steals 2 bags a game, I think Alford will start the year in Dunedin and be given every opportunity to correct last years slump.

Where he’ll end the season: AA New Hampshire – Should Alford progress like everyone is hoping, he should end the year in AA and perhaps get a cup of coffee in AAA to see how his bat handles against more seasoned players. I don’t think he’ll be a September call-up, although if his numbers don’t look to be improving, I can see him being dangled in a mid-season trade while he still holds some value as a prospect. He has all the tools to be that dynamic, lead off, contact hitter with speed that every team desires but he’s going into year 5 in the Jays system. He has to show major improvements this year if he wants to remain relevant.

This kid is nice, like REAL nice. He has all the makings to be an Aaron Sanchez 2.0 that wasn’t rushed to the majors. SRF (short form for Sean Reid-Foley, dummy) split last year in Lansing and Dunedin finishing with a 10-5 record while holding his ERA at 2.81…I just got a little wet. He amassed 130 strikeouts in 115 innings pitched while maintaining a low Walk rate. His numbers got better when he was promoted to Dunedin which gives us hope that this kid is the real deal. He also has sleeves and a nasty little pornstar duster which will make him a fan favourite

Where he starts the season: AA New Hampshire – SRF will probably be the opening day starter for New Hampshire and I’m betting he has an impressive Spring Training. He’ll most likely be kept with the big club most of the spring to see how well his stuff matches up against major league hitters.

Where he’ll end the season: Majors – I think this kid has major league stuff and he’ll dominate in the minors this year. You’ll probably see him in AAA by the All Star Break and then as a September call-up. I don’t think you’ll see him as an injury replacement to the rotation (considering their depth) but I can see him getting some innings in the bullpen and perhaps earning a playoff roster spot if he does damage and the Jays make playoffs. 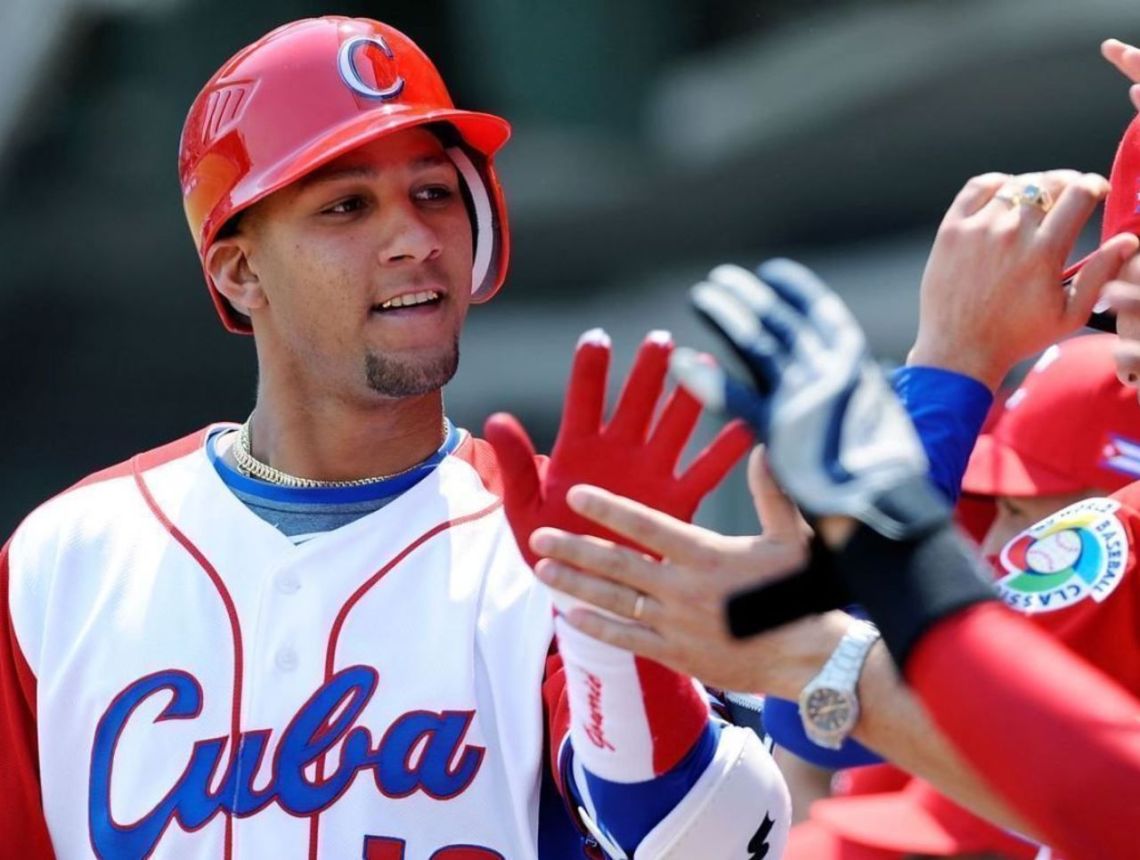 Out of everyone on this list, I think this kid will be the first to make the Majors. He’s straight out of Cuba and comes from a family of baseball players (one older brother plays in Cuba, one is on the Astros and his Dad was a Cuban baseball legend). He’s got baseball in his blood and I think this was a nice find and signing by the Jays scouting staff and management. He is only 21 but has played in the Cuban professional league since he was 16, which is comparable to AA baseball in North America. Last season he hit .344/.407/.560 which is fucking MINT. He’ll be given some serious playing time and lots of plate appearances this spring and Jays management is eager to see how he fairs against the major league competition. It will also help that he’s very versatile and can play multiple positions. I’ve heard Jays want him to play SS but I can see him getting plenty of reps at 2B.

Where he’ll start the season: AAA Buffalo – If he has a solid spring, there is no doubt he should be in AAA. I think AA will not be challenging enough and he’ll need to face some fringe major leaguers in AAA to really be challenged. I also have him as a long shot to crack the major league opening day roster. Devon Travis is fragile and after off-season surgery, he still may not be ready to go for opening day. If Gourriel shows he can string together quality at-bats this spring, I’d rather have him start at 2B over Goins.

Where he’ll end the season: Majors – Barring a complete breakdown, I believe this kid will be in the Majors by June the latest. Travis has never played 2 months straight and Tulo had an uncharacteristically healthy season last year. Should one or both of those players go down for a prolonged period of time I think they’ll need to call him up given his versatility and projected offensive skills. Jays management will only be able to take Goins and Barney’s bat in the lineup everyday for so long. I think this kid has a good shot to get to the big club and stay there. 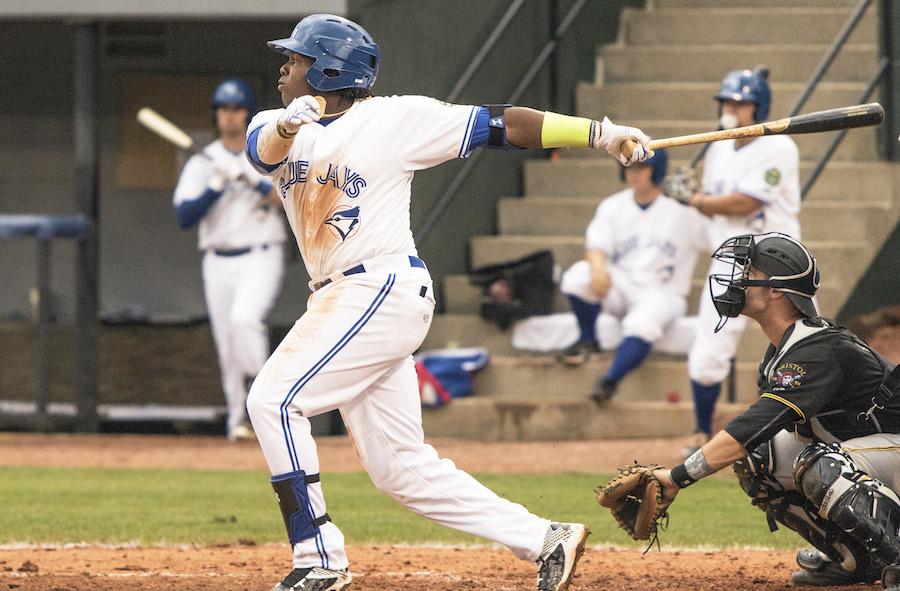 Vlad Guerrero Jr is the crown jewel of the Jays farm system. This kid can MASH. He spent all of last season in low-A Bluefield and put up 8 HR and 46 RBI in only 64 games. Not bad for a 17 year old in his first pro season. Vlad Jr was born in 1999 (yeah I know, fuck us right?) which means he won’t even be 18 when Spring Training starts this week. He will get some quality reps this spring at 3B given Donaldson’s recent calf injury, so we’ll get to see what his agility and fielding looks like. Despite being young, this kid hits major league home runs. He’s a bit on the chunky side and I seriously don’t see him being a third baseman for very long (that’s why I put “lol” up there). He’s built to be a career first baseman/DH. I’m most excited to see him this spring, to see how he matches up against major league pitching and how far he can smash it. He’s a more disciplined hitter than his father was but this kid will give you a warm fuzzy feeling in your nether regions, I guarantee it.

Where he starts the season: Single-A Dunedin – I know, I’m excited, your excited, Vlad is excited but we gotta be real here, he’s only 17 right now. He may very well smash the ball in spring but the Jays will want to see him develop into a complete hitter. They’ll want to make sure he keeps his strikeouts low and maintains a good avg. He’ll best be served to face players his age in Single A.

Where he’ll end the season: AA New Hampshire – Hopefully he’ll continue to build on his impressive hitting numbers while showing he can play the field as well. Jays will want to watch his weight all season and ensure he’s becoming the complete baseball player they desire. Once he shows he can dominate in AA, I think he’ll make the jump straight to the majors whenever that may be. I don’t think it’ll be this year, given guys like Tellez are more mature than he is right now, but I see him having a legit shot next year. He’ll be 18 when the season starts so I can’t see him being a September call-up unless he completely dominates every pitcher he sees in the minors, but I fully expect us to be drooling at his numbers and moonshots all season long,  dreaming of what can be in 2018.

Reese McGuire (C): Acquired along with Liriano in the Drew Hutchison deal, he could be a long shot for the back-up catcher role with the major league squad. If not, he should be the main guy behind the plate in AAA Buffalo.

Conner Greene (P): One of Toronto’s top pitching prospects. Will start in AA New Hampshire most likely and could be called up for bullpen help should the Jays need it at some point this summer. He has an electric arm but needs to keep his runs & walks down, while getting more outs. Solid prospect, just not the same upside as Sean Reid-Foley, in my opinion.